A Message From the Future

A Message From the Future

2010 / Jamaica Avenue in vicinity of JCAL

Stayrook’s duo of projects re-presents Jamaica Avenue as a portal through time and space. Audience members become time travelers, with the artist, a messenger from the future, as a guide. Rather than conveying epic matters of life and death (the sci-fi cliché of signs from the future), the messages audience members encounter as they move down the street deliver the outcome of a reality or instance merely seconds or minutes ahead, acting as a reminder of the immediate temporal and physical environment along Jamaica Avenue.

Stayrook’s contribution includes two scheduled performances in various locations between these signs and between sunrise and sunset. The first, A Message From the Future takes place on April 10 and lasts approximately one hour. During this performance, the artist takes the role of a street advertiser handing out postcards representing signs on Jamaica Avenue that announce physical structures and businesses further along the street. The “signs” or “omens” in A Message From the Future suggest a future outcome that is ultimately determined by the individual who witnesses it. For example, turning the corner onto Merrick Boulevard after receiving a postcard announcing something further down Jamaica Avenue in the performance would cause the foretold event to never occur for this individual. This project explores the possibility for chance and free will in daily life while simultaneously entertaining an argument for deterministic causality. The second performance, String Theory, takes place sometime near the end of the exhibition and lasts approximately 45 minutes. The performance is bracketed by two prominent signs placed in bus stalls at each end of Jamaica Avenue, reading “PAST” on the east and “FUTURE” on the west. The signs contour Jamaica Avenue as a stage for the performances, as well as a timeline of the day as the sun travels from the Avenue’s East end to the West end. During this performance the artist in a somewhat bizarre costume attaches a ball of string to the “PAST” sign and unwinds it on a walk to the “FUTURE” sign.

Chad Stayrook lives and works in New York City. Stayrook was born 1980 in Columbus, OH. He received his B.F.A. in Sculpture from Ohio University and his M.F.A. in New Genres from the San Francisco Art Institute. Stayrook has exhibited extensively throughout the US in New York, San Francisco, Philadelphia, and Washington D.C. and internationally in the Netherlands, UK, and South Korea. He has participated as an artist in residence at the Tin Shop Studio in Breckenridge CO, Jamaica Center for Arts and Learning’s Studio LLC program in Queens, NY, and will soon embark on an expedition to the arctic circle with 17 other artists and scientists. Stayrook taught art courses at Sarah Lawrence College, San Francisco Art Institute, and the Columbus Museum of Art. He worked as the curator for the Sarah Lawrence College Barbara Walters Gallery for 5 years and continues to curate independently. He is also a founding member of the Bandwagon artist collective. 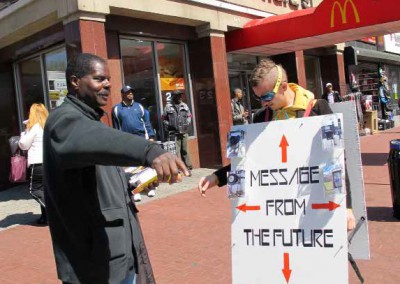 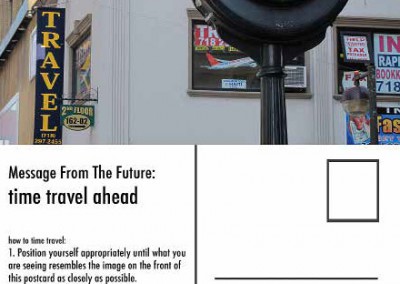