Responding to the tremendous cultural diversity of the Jamaica neighborhood, Heather Hart’s piece, Blue Veins, examines the complexities of contemporary racial identity and the consequential absurdity of categorical ethnic labels. In a series of photographs depicting the wrists of a diverse group of participants, the artist makes a comment on intra-racial conflict through a historical example. During the period just after the Emancipation, Hart cites that “there was a rise in formation of exclusive Black societies that were rumored to base their admittance on whether one’s skin was light enough to see the blue veins at the base of the wrist.” In these images, Hart’s models offer up their wrists for the viewer’s consideration, leaving the often ambiguous tones of skin color as the sole indicators of the bearers’ unique genetic pairings. Installed in public telephone booths, Hart’s images reach the community in an accessible, everyday situation to speak to a preponderant issue that is commonly encountered by the residents of Jamaica. – J.D.

Heather Hart is an alumna from Skowhegan School of Painting and Sculpture (2005). Ms. Hart has participated in various exhibitions including the “Nova” art fair in Chicago, IL (2006), “Passport” at Roebling Hall Gallery, NY (2006), and “Boredom: I Learned It by Watching You” at Portland Art Center, OR (2006).

When we speak to each other much of what really matters falls between the lines of what we actually say. These communication gaps grow and narrow depending on our understanding of and relation to what is said. Persons from the same hometown may share a frame of reference in interpreting an idea or a piece of art. One person’s nostalgia may be alien to the next.

Many circumstances factor into the inability to connect with each other: distance, language, assumption, perspective. Children are equipped to bridge these gaps more frequently than adults. Not only because of their limited experience, but also through the disarmament of play.

Wish You Were Here works with these concepts of interchange. The installation consists of two interactive stations in the medium of playground equipment on either side of the corner that The Land Mark Project is located. This corner is between the commercial district of Jamaica and the subway station where commuter foot traffic flows all day. Each station invites the public to pause and play. They may take a seat in the swing and begin a correspondence with a participant who pauses at the other station. Among other activities, the focal point of each station is a laundry line that spans between them carrying postcards from one side to the other and back. On the postcards each participant may write their own notes to pin on the line and send to the other station. They are asked to share something- a bit of knowledge, a secret, a wish- that they may not have spoken lately. They may then remove a note that was written by a participant at the other station and take it with them.

The installation invites strangers to exchange greetings as if they were old friends on distant continents. But like any human communication, there is an unpredictability about the project, a possibility of failed or miscommunication. Though the tools to exchange are provided for the public, they may chose not to participate. As an author, I can arrange these cirumstances, but I cannot control them. In the tremendously diverse neighborhood of Jamaica, on a corner where people rush by to go where they go, the stations exist not only to encourage pause and play, but also to highlite human unpredictibility and to traverse cultural divides. 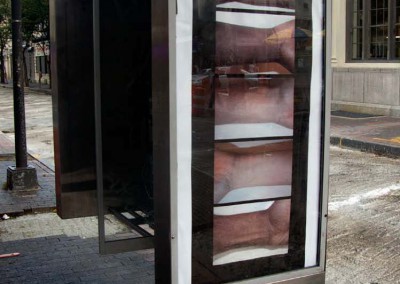 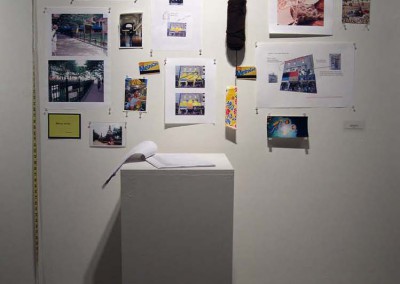 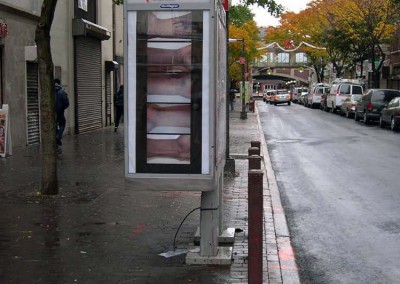