Flight Lines is a computer vision project that monitors the sky not just for customary birds and planes, but rapidly multiplying drones and increasingly frequent extreme weather events. Emerging from an interest in the ecology of the Anthropocene, Flight Lines is an effort to document the skies as they are today, with the knowledge that they are rapidly evolving and have variable characteristics in different locations at different times.

For Jamaica Flux we have added a new, Jamaica-based node to a network of cameras across New York City. The cameras, including one on the roof of JCAL, watch the sky at each location daily. They capture the particular ‘sky signatures’ that are revealed through algorithmic processing, which would otherwise remain invisible. The project also incorporates a web interface supported by Turbulence.org, which allows viewers to watch the videos and render them into a series of silhouetted frames that trace the arcs of objects that move through them, be they birds, trash, or flying machines. The paths generated by this process are its “flight lines.” During Jamaica flux we will present a series of videos drawn from across the city with a focus on those made above from the roof of JCAL.

Ellie Irons is an interdisciplinary artist and educator based in Brooklyn, NY. Dan Phiffer is a new media hacker from California. Ellie and Dan have collaborated on a variety of projects over the last ten years, including work with the collaborative group Future Archaeology and individual pieces ranging from public sculptural installations to web sites. They share an interest in the intertwining of technology, ecology, and public access to information. 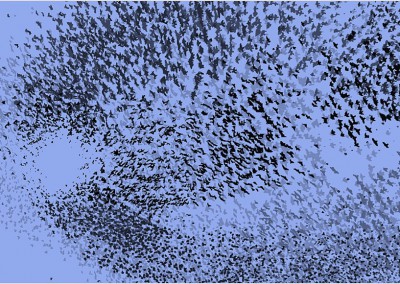