A Pop-up within A Pop-up

A Pop-up within A Pop-up

2016 / MODA Retail Space
At the eleventh hour, when we finally secured a 6,150 sq feet retail space at the Moda Upgraded Living one week before the exhibition opening, Dominique Sindayiganza and Rejin Leys proposed to call local artists in Jamaica, Queens to present their work in the space along with other artists in Jamaica Flux: Workspaces & Windows 2016. It was an exciting idea that raised our already high spirits! So Dominique, Rejin, and Jeffrey Allen Price invited artists they know in the area. Eight artists responded to their calls and this catalog section represents their art. Organized in the manner of a blitzkrieg, this pop-up exhibition produced a new network among artists, expanding the strength of the whole project in terms of community engagement. The artists who have contributed their work are: Carl Karni-Bain “BAI,” Ifeatuanya Chiejina, Juan Lopez Espantaleon, Neha Gautam, Sharmin Hossain, Lehna Huie, Susan Kelly, and mahlOt Sansosa. 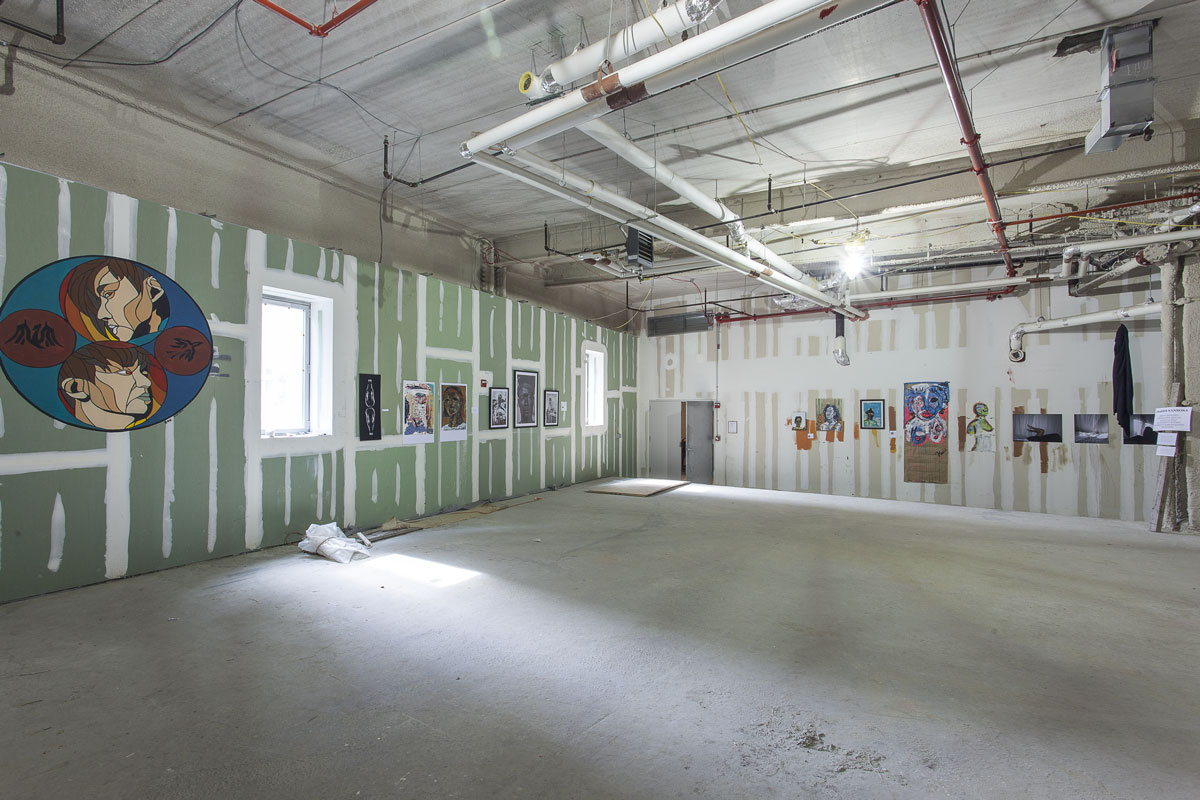 Carl Karni-Bain “BAI” received his fine arts training at the California College of Arts and Crafts. He has exhibited extensively in San Francisco Bay area, North Carolina, New York and Toronto. The artist states: “I have been painting faces and figures throughout my career as they are part of an ongoing journey of which neither I nor the viewer will ever tire. The foundation for my portraits comes from the African Mask. As a child, I remember the visual impact it had on me and remains strong in my retainable memory to this day. The mask forces a response from the viewer, whether a primitive or contemporary response. Colour is the symbol I use to reflect the emotional stages through which we as humans experience – reds for the violent past, blues, greens for the peace to come, and yellow and oranges for the bright future ahead. The latter is not guaranteed in my paintings. However, I think it is attainable in life.” 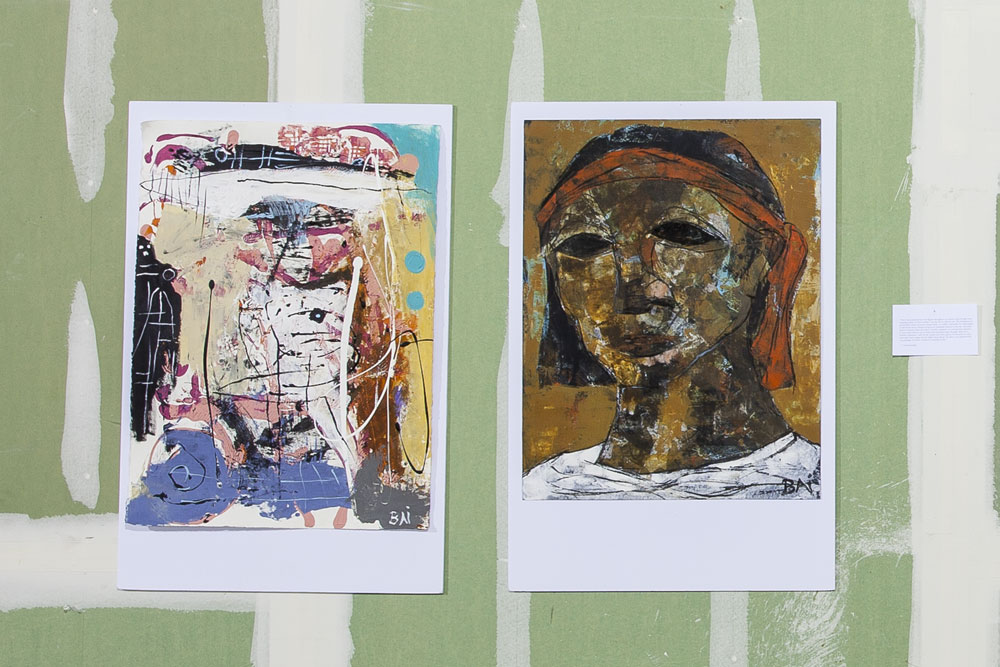 Ifeatuanya Chiejina is a visual artist born and raised in NYC. The artist states: “With each day that passes, I am thankful to be a black Igbo female visual artist. I’m constantly coming into the realization that it is up to me to present myself, and bring forth my own happiness. I carry some ideas, thoughts,   and truths that are reflective of Nigerian customs and traditions. But I also accept and carry with me truths that are not.” 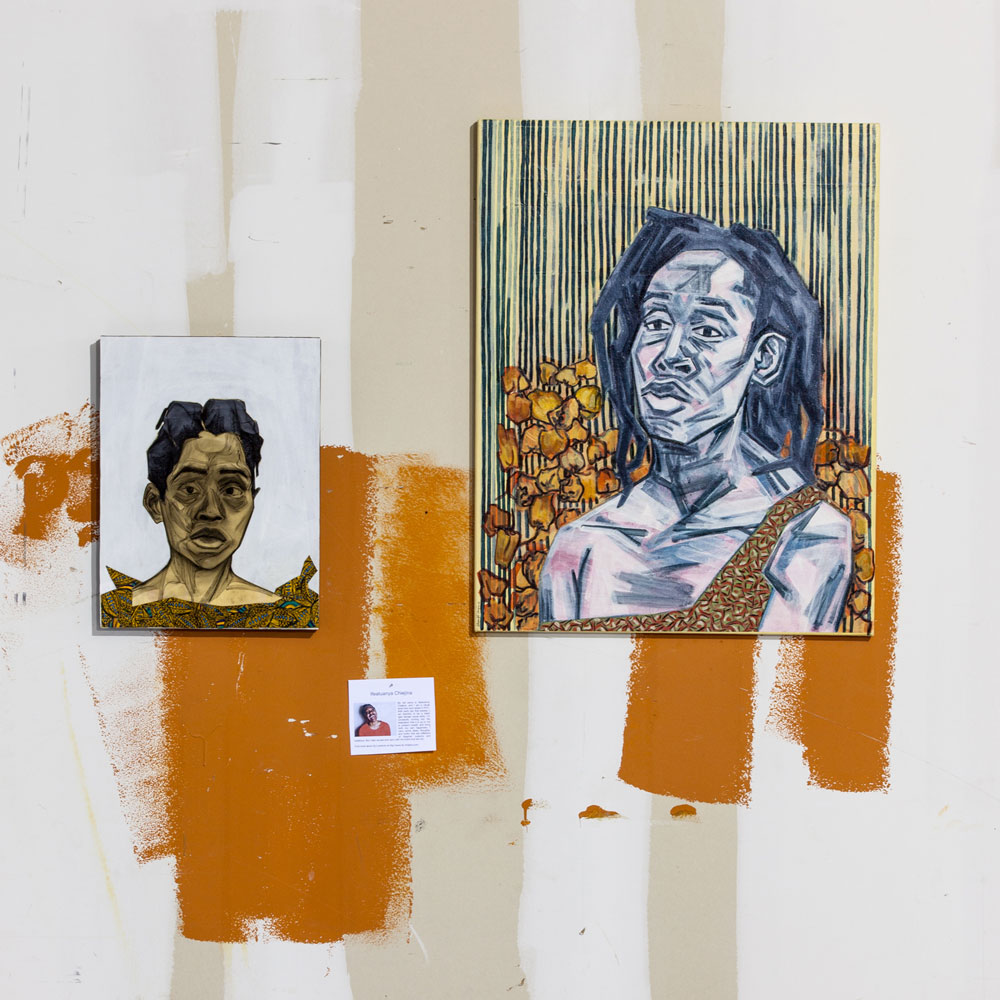 Espantaleon was born and raised in Madrid, Spain. He attended school at Escuela de Fotografia Tecnica de Imagen (EFTI) for two years. In this period of time, he studied with some of the most influential photographers and artists in Spain, such as Chema Madoz, Jane Evelyn Atwood, Rosalind Williams, Cristina Garcia Rodero, Alberto Garcia Alix and Ciuco Gutierrez. He moved to New York in 2006 and restarted his career as both a food commercial photographer and an artist. He attended school at the Fashion Institute of Technology and currently attends at LIU-Post, working to earn his MFA as a catalyzer of artist evolution. Espantaleon has published his personal and commercial work in multiple magazines including El Pais, New York Times Magazine, The New Yorker, T-Magazine, Zagat NY, Bon Appetit, Lux magazine, En Rodaje Magazine, and Elle España. 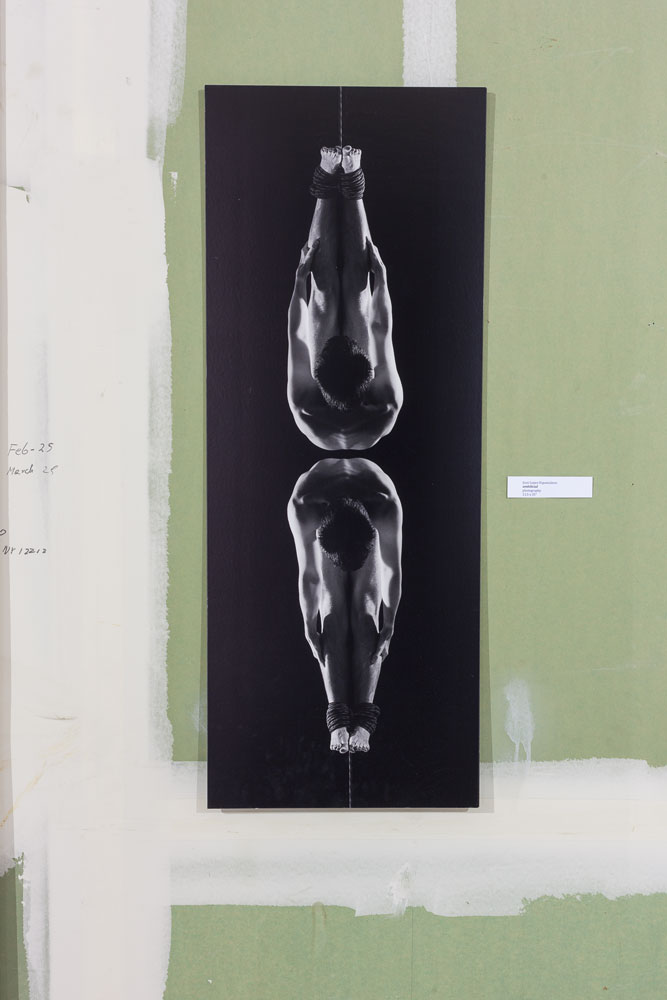 Neha Gautam is a photographer, educator, and documentarian. “Millions March, December 13, 2014 brought tens of thousands people together speaking up for racial injustice and against police brutality in New York City.  After the non-indictment of officer Pantaleo for the death of Eric Garner, this demonstration in NYC was the largest showcase and demonstration for racial justice and equity in NYC. To people who were a part of the event and or saw the march happen, it felt like seeing a real movement, a social and critical movement. To me, it was a powerful moment to see people of color and allies demanding justice for black lives lost to police violence. I remember hearing a large contingent singing ‘… and we ain’t gonna stop until people are free.’ These images speak to the message and energy being sent out that day and to this day now as we are still asking for true freedom to live in a world that acknowledges that black lives do matter. “ 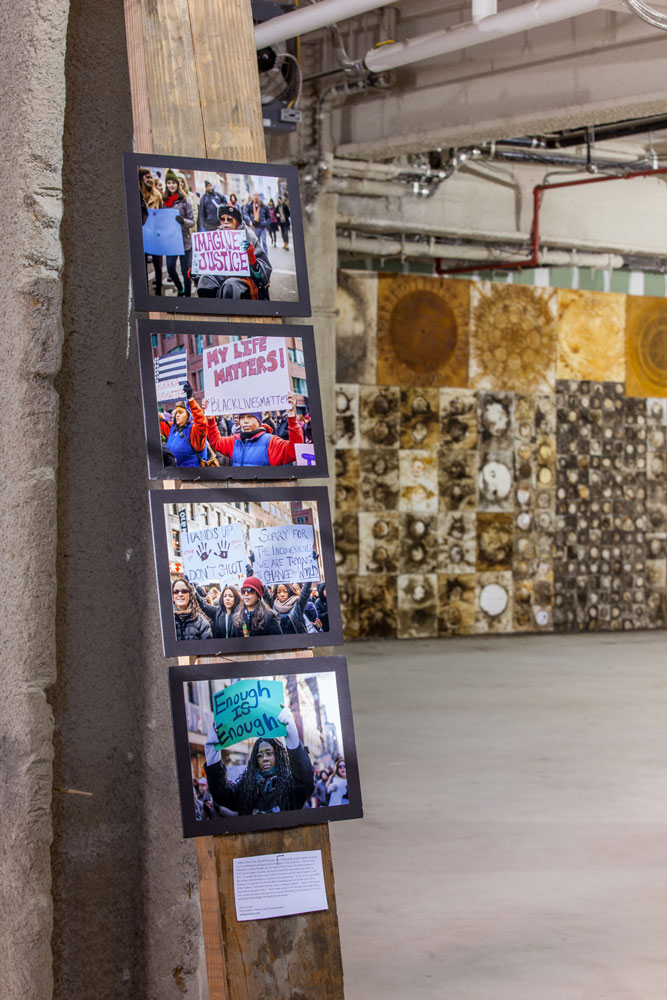 Sharmin Hossain is a Queens-bred henna tattoo artist, political educator, and archivist. She is the Director of the Bangladeshi Historical Memory Project, a public theatre project and digital archive of Bangladeshi resistance. Follow her on Instagram: @sharminultra. 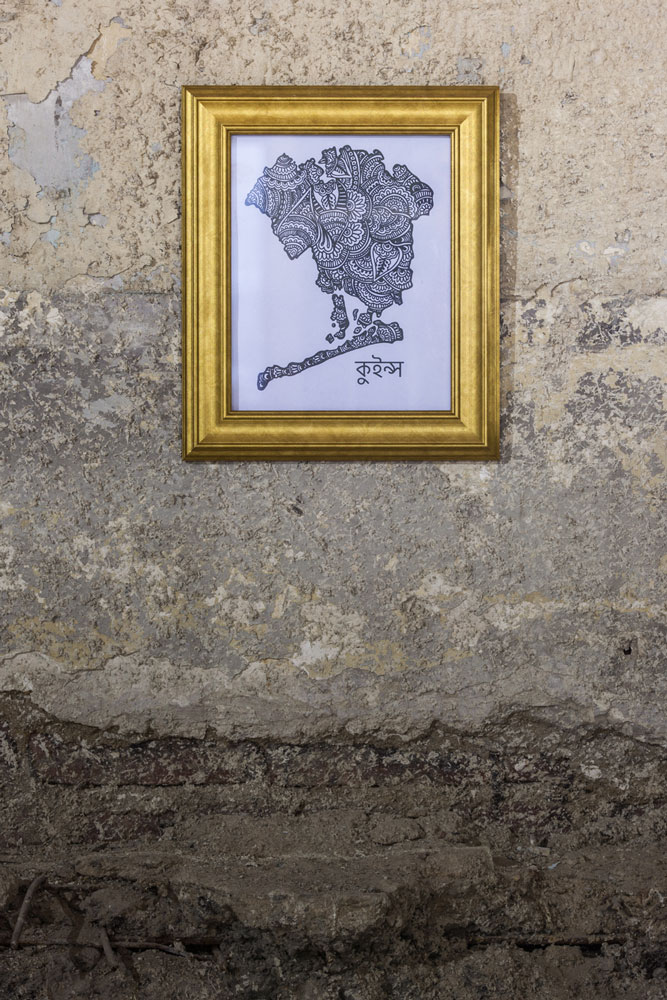 Lehna Huie (b. 1988, NYC) is a multidisciplinary fine artist, arts educator, curator, and activist  exercising a belief in the power of multi-vocal art. She is an artist amplifying stories of love, loss, and remembrance. Huie is deeply committed to the fusion of arts and social change as a path to liberation: exploring the past, present and the future of struggle and freedom. Central to Huie’s creative work is her utilization of artistic expression as a compass for healing our world. Her work embodies cultural critique, celebration, and Huie’s studio practice makes use of various materials on canvas, paper, and wooden surfaces. Her portraits and figurative work are highly textured. Often layered with diverse materials: paint, plaster, sawdust, beads, shells, etc., as well as found objects, her work brings forth a symphony of moods. Grounded by the global community, New York City life, and the essence of her familial homeland in Jamaica, Huie is ever inspired by the African Diaspora. 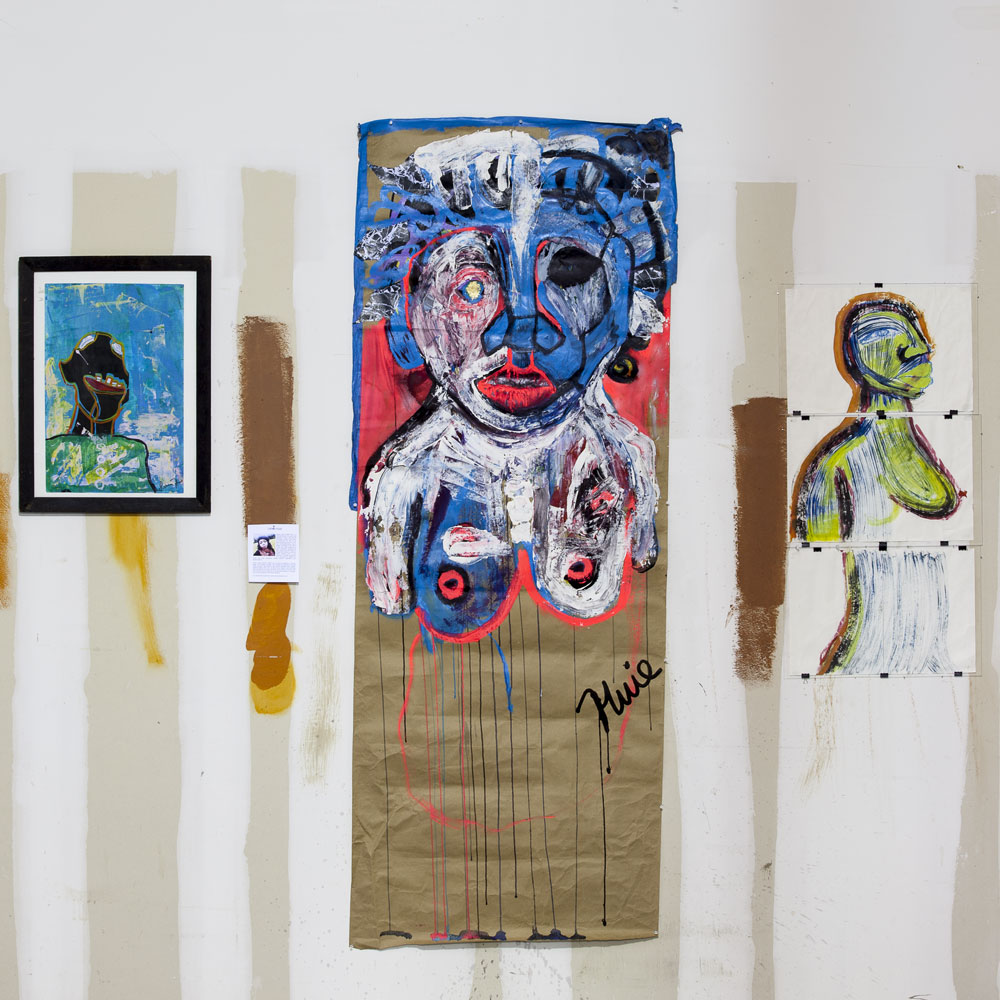 Susan Kelly is a multi-process artist, whose body of work often incorporates several different techniques into the final pieces. Susan works with a sense of urgency, where there are multiple pieces, in different media, all happening at one time. In her latest works, Susan has begun transforming her interest in Korean pop idol culture into bright stained glass portraits of singing idols. The stained glass gives the featured idol a religious or holy feeling, similar to the other-worldly pedestals that fans often hold their idols to, intentionally elevating them or accidentally by delusion. Susan’s work is a celebration and critique of Korean pop idol culture. 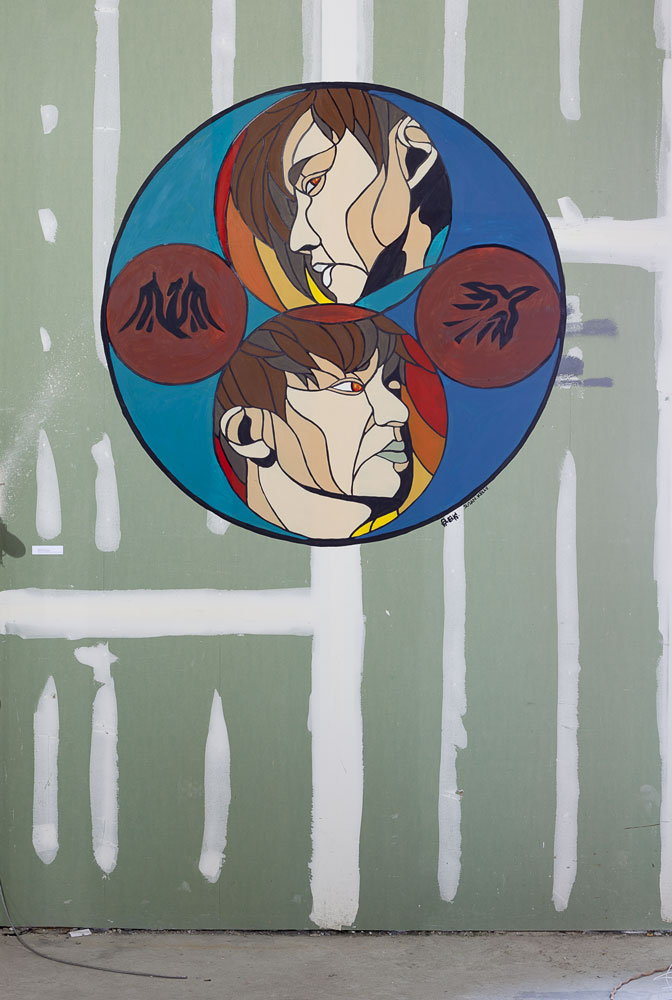 mahlOt Sansosa is a multidisciplinary artist who employs nonfiction photography as the root of  her practice. Born in Mirangaba, Bahia, to a Brazilian Catholic father and an East African veiled Muslim mother, she correlates her immigration to the US to her independent studies of identity as they relate to displacement, self authorship, cultural equity and the politics of corporeal location. She creates visual lifescapes drawn from collective visceral memory induced by her past and present psychological migratory patterns, which indict singular notions of reduction and erasure projected upon minority female selfhood. Utilizing performative sound and mixed media,  Sansosa instigates an anti-monolithic, anti-binary approach to rewriting and reintroducing the narrative of Black and Brown female subjectivity. 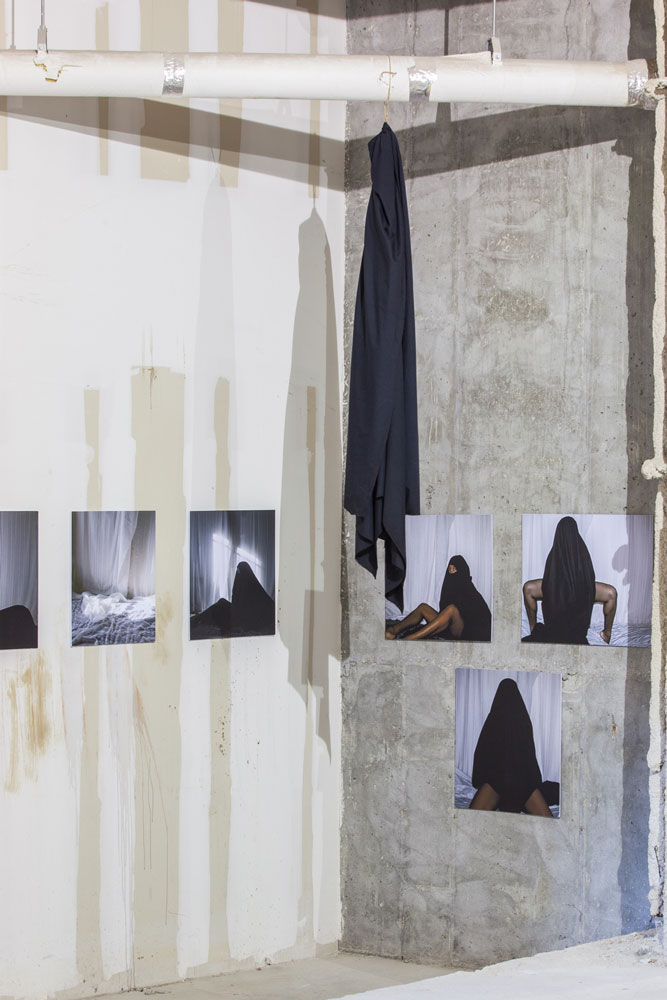