The Get Help! sign series was designed with the support of The Rockefeller Foundation Bellagio Center, Italy. The first design was completed in 1992 did not include the written texts. In 1994, the written information was added and the sign made into the multiples. The series was originally meant to connect safe houses with the victims of domestic violence. A small version of Safe to Stroll without the original font was shown in Granet’s mini retrospective Bluer Pastures at New Harmony Gallery at the Southern Indiana University, New Harmony, IL (2008) and in an indoor gallery at the 2009 Incheon Women Artists’ Biennale, Incheon, South Korea (2009). In Jamaica Flux 2010, the sign is shown outdoors and in a larger size. Safe to Sway was shown at New Harmony Gallery at the Southern Indiana University, New Harmony, IL (2008), where it was first made at a city sign shop. It was then shown in South Korean Biennale (2009) in the smaller size, 12”x 12”, in vinyl, and not the ink. Both shows took place in indoor galleries. The 2010 edition for Jamaica Flux is newly fabricated in a large scale and first shown in New York. Curb Your Animal Instinct was designed, fabricated, and installed with support from Exit Art, NYFA, Art Matters, LMCC & DOT). Exhibited at World Trade Center, South Street Seaport, Wall Street. Museum of Modern Art, NYC, CNN Year in Review, Wall Street Journal, New York Post, Harpur Magazine, Glamour Magazine, Gran Bazaar, Italy, Der Spiegal, New India Press, LA Times, WMCA,(radio), and PPOW.

Ilona Granet is an activist artist and produces signage for streets and the public realm. Her motifs often include woman warrior, aircrafts, and missiles, addressing political, social, class-conscious issues, provoking us to act against violence, brutality and injustice. Her signs combine simplified icons and texts usually placed underneath the icons, compensating the power of both signifiers by the other. While the two signs, Get Help and Curb Your Animal Instinct, that are historic and re-installed for Jamaica Flux 2010, remain on domestic focus, Granet has, since 9/11, produced a series of safety signs criticizing the US international politics driven by war and hatred. These recent signs with their lavender background signify hopes and encouragement to create a world that is safer and more peaceful and less violent. Granet’s signs can be seen as an activist campaign of political and educational intentions to provoke public actions for creating safe urban environment, to fight against hatreds related to gender, race, and religions, and to promote antiviolence awareness against domestic, gun, and war violence.
Ilona Granet (b. Brooklyn, NY) earned her BFA from Tyler School of Art, Temple University, Philadelphia, PA, and her MFA from School of the Art Institute of Chicago. Her long exhibition history includes 2009 Incheon Women Artists’ Biennale, Incheon, Korea (2009); the landmark show WACK! Show at PS 1, Long Island City, NY (2008); and One Woman Show, A Mini Retrospective at New Harmony Gallery of Contemporary Art, New Harmony, Indiana (2008). 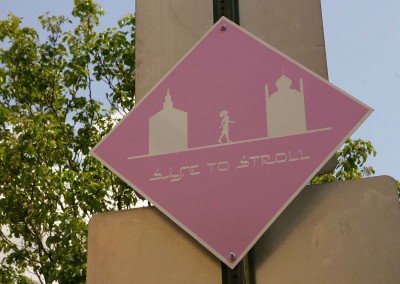 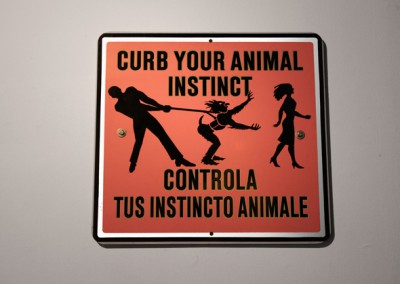 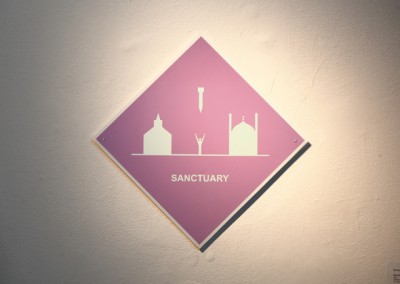 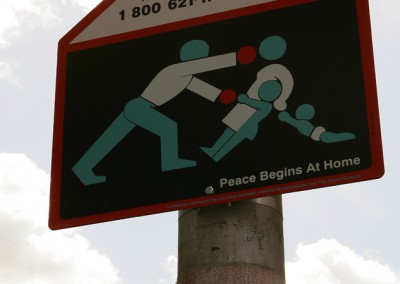