Calling attention to the important environmental role trees play, Hirakawa installed 1,100 PVC disks on branches of a tree in Rufus King Park, behind Rufus King Manor Museum. The PVC “leaves”, which contain photo-chromic pigments, are tied to the tree branches using clear fishing line or strings. Simulating photosynthesis, the plastic leaves react with ultraviolet rays, turning purple by day and translucent, milky white by night. The deepness and saturation of the color depends on how much sunlight they absorb.

Shigeko Hirakawa graduated from the Tokyo National University of Fine Arts and Music in 1980 and was a student in Oliver Debré’s atelier at the Ecole Nationale Supérieure des Beaux-Arts de Paris from 1983–1986. She has been featured in numerous solo exhibitions over the last 20 years including “Air and Water” at Gallery Parisud in Cachan, France (2005), “Eau Suivie” at Maison des Arts in Malakoff, France (2001) and “More than 10 Years in Paris” at Gallery Tom in Tokyo, Japan (1995). Her work has also been included in group shows at locations including the Monos Gallery in Liege, Belgium; Gallery Pascal Vanhoecke in Tokyo, Japan; Gallery Janus Avivson in London, UK; and many other venues. She received a Pollack- Krasner Foundation grant in 2006/2007, an Art Omi International residency award in 2004, and a grant from the Japanese Cultural Affairs Department (Bunka-Cho) to spend three months in New York City in 2003. Ms. Hirakawa, who was born in Japan, has been living in France since 1983.

We speak more and more about atmospheric pollution which causes Global warming and the increase of respiratory diseases in human beings. People escape from the city where the polluted air is concentrated and go to the countryside or to the mountains to be able to breathe deeply. But they do this without appreciating how much the forests also suffer from air pollution.

More than one quarter of trees suffer from defoliation of more than 25%, and one tenth shows a discoloration of foliage of more than 10%. Such are the conclusions of the 1996 report, “International Program concerned with the Evaluation and Monitoring of the Effects of Atmospheric Pollution on Forests, and the European Union Program for the Protection of Forests against Air Pollution”. Air pollution affects European forest ecosystems.

“Forests suffer from discoloration of their foliage.” The fact that vegetation produces oxygen is wellknown. Would forests begin to miss chlorophyll?! Chlorophyll is a green pigment which is activated by solar energy and functions as a catalyst in a reaction which produces glucose and oxygen from a mixture of carbon dioxide and water. With chlorophyll, plants produce glucose for their own food and oxygen for us. Less chlorophyll, less oxygen.

This subtle chlorophyll decrease of 10% in forests’ trees is still invisible. But by the time we notice that forests are no longer green, will it not be too late? This visual perception of the decrease in green pigment in forests would alert us: « Air in Peril »!

“Tree of Photosynthesis” is the key element of the project « Air in Peril ». This tree wants to revive photosynthesis. It replaces the quantity of lost chlorophyll and tries artificially to color the forests again with plastic PVC leaves which contain photochromic pigments. They do not become green but purple. This violent contrast of green and purple in forests would give maximum alarm.

The plastic leaves with photochromic pigments will react exactly in accordance with the quantity of ultraviolet rays and will be purple while they receive solar rays but will become translucent milky-white by night, giving the tree the appearance of a ghost tree.

“Air Wheel” is a representation of solar energy exciting chlorophyll and at the same time an air wheel which endeavors to provide air to the forests, and “Molecule of Oxygen” is a scheme of a molecule of oxygen which would be produced by the Air Wheel and would have landed 20 meters away. 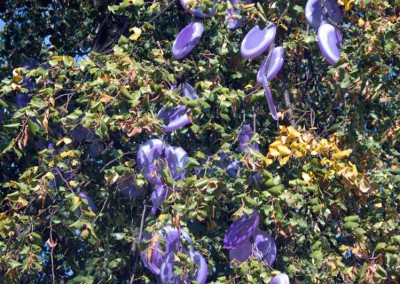 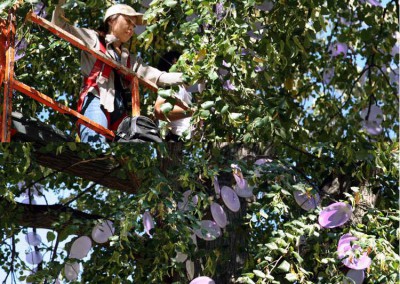 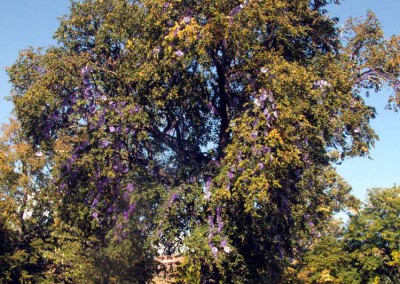